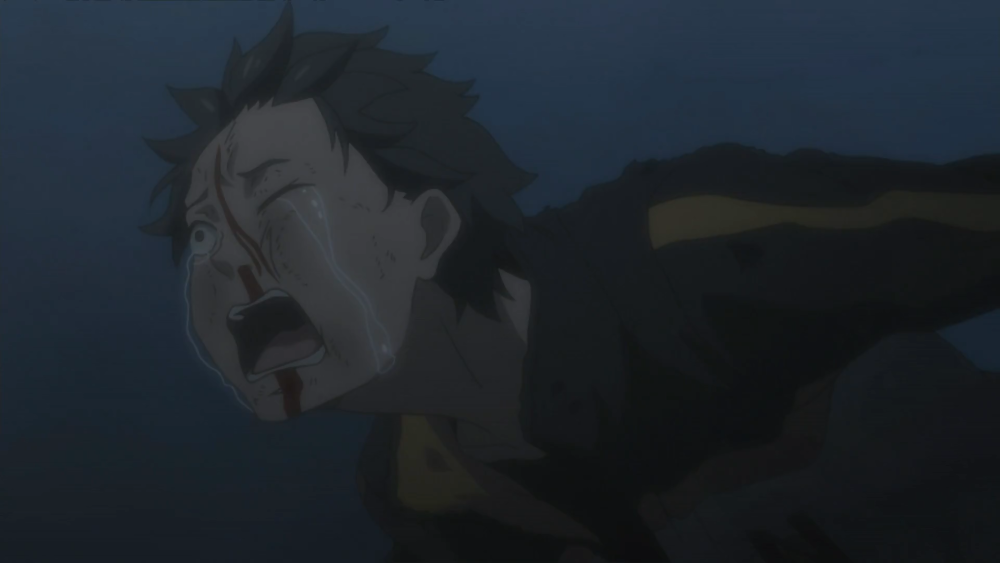 Chapter 68 [The Taste Of Death]

――In a world where everything seemed twisted, Subaru was desperately running.

The words repeated and repeated in his mind.
Beneath his eyelids as he repeated those words were Roswaal’s final moments, felled by the Great Rabbit’s fangs.
No resistance, so easily accepting his death, without even once crying out in pain for his ruptured flesh, Roswaal allowed his own existence to end.

――Aberrant.
What would you call this, if not aberrant and insane?

As long as his goal would be accomplished in a Parallel World, he was not bothered by his death―― If this was a game, Subaru might have given the player character’s death the same significance.
But it was reality.
Just how could a person, in reality, entrust his life to an alternate self?
This Roswaal was eaten by rabbits in front of Subaru’s eyes. And his consciousness would not follow Subaru to the world beyond Death.
He may be staking his wishes on Return by Death, same as Subaru, but the weight of the toll was nowhere near the same.
Because, unlike Subaru, Roswaal could not reclaim the price he had paid.

Recalling the macabre image of Roswaal’s death as he ran, Subaru was hounded by the urge to vomit.
Bile surged up, burning his throat. But he couldn’t spare even the time to puke as he wandered through the Sanctuary in search of survivors.

――Hell unfolded before Subaru once again.

Snow had stopped falling on the Sanctuary, but the howling wind persisted.
Lifting his face, grimacing at the skin-shearing cold as he gazed about his surroundings, he could hear the animals’ calls all around, intermixed with the wind.

Grinding, grinding, the noise of serrated teeth grinding besieged the Sanctuary as if voicing their threat to their prey.

The Great Rabbit prowled through the Sanctuary in search of their feed.
Just how terrible was the hunger and famine that assaulted them?

When they fail to find prey, as if not to waste time letting their teeth stand idle, they would stave off their hunger by biting into their companions. A true, abominable monster.
Bit by bit, the grating noise of gnawing teeth and their cannibalistic shrieks of death and ecstasy chipped away at Subaru’s sanity.

While trying to shake off that appalling cacophony, a rabbit with wide open jaws shot over Subaru’s head. Teeth clicked viciously upon teeth as it tumbled into the snow. Having missed its prey, the rabbit flipped around with a threatening hiss.
Immediately, a Lewes clone running alongside Subaru crushed her heel into the rabbit’s torso.
With the sound of meat squishing and bones cracking, the rabbit puked out its body’s innards from its mouth, dead.

Exhaling, paying no heed to the corpse, Subaru resumed his sprint as the Lewes clones moved out alongside him.
Not far behind them, other rabbits arrived at the crushed corpse. Hearing the sound of the corpse devoured in an instant, the bells of doom inside Subaru rang ever louder.

Six Lewes clones remained at Subaru’s side.
The eleven who had been present at Roswaal’s death had had their numbers cut by half.
Having been ordered to “Protect Subaru”, some had turned to face the charging rabbits, while some used their bodies to shield him before returning to mana.

As for why he ordered the clones to protect him with their lives, Subaru had already given up trying to explain it.
Right now, the only thing on his mind was the safety of Rem in the Cathedral and of Emilia inside the Tomb, while all else was abandoned somewhere beyond his considerations.
That was the only way to justify his present actions, and to safeguard his own sanity.

Avoiding the rabbit-infested roads with the snow pulling at his steps, Subaru took a large detour around the Sanctuary to reach the village centre and the Cathedral.
In a village devoid of any source of light, Subaru immediately spotted the Cathedral.
But, of course.

――Since amidst this world of white, only the Cathedral was enveloped in pure-red flames.

Falling to his knees in the snow, Subaru muttered in a hoarse daze.
The crackling of the sprawling blaze mixed with the sound of snapping wood as Subaru watched rabbits leaping into the flame like moths, intending to eat the prey inside only to be instantly burned to a crisp.

――Deciding survival was hopeless, rather than be eaten by rabbits, they had chosen to commit suicide. Subaru wasn’t incapable of understanding this feeling. He wasn’t incapable, but,

[Subaru: Even so… ould’ve resisted to the end……]

“I wish you would’ve fought on to the very end without giving up on life.” But perhaps, that was an all too heartless thought.

Both Roswaal and the people of the Sanctuary had treated their lives with excessive neglect.
Nearly forgetting that he himself was most guilty of that charge, Subaru covered his face as tears streamed from his eyes.

Neither Roswaal nor Subaru had inspired enough hope for the residents of the Sanctuary and the refugees of Arlam to resist until the very end.
If Subaru had managed to build that kind of trust, surely, they wouldn’t have given up until the last moment.
――Once again, everything was Subaru’s fault, and Subaru’s crime.

…survived? This ordering of the value of life was just the height of hubris and pride.
Mentally, Subaru called out to the clone he had instructed to take Rem to the Cathedral――the current Lewes personality. But, he could find no visible reaction indicating that she had heard it.

――Rem was inside that burning Cathedral.
Or, even if they escaped, Subaru was not nearly naive enough to think that Lewes could have single-handedly protected Rem from the Great Rabbit as they ran.

He clenched down on his molars. There was the taste of blood.
Biting into the bloody taste, into the surging bitterness, Subaru clenched onto his decision. ――He should have already realized that this world was lost, and that he only wound up here because of his repeated refusal to accept it.
But now, it was truly about time to give up.

He could hear the hunger-plagued monster approaching.
That was because the rabbits, who had abandoned the prospect of devouring any prey in the burnt Cathedral, had noticed the presence of the kneeling Subaru and the Lewes clones surrounding him.

Standing up, brushing off the snow, Subaru spilled a deep exhale.
He did not notice the sensation of the tears streaming down his cheeks. And so, he did not wipe them away.

This world was ending.
And even if it wasn’t ending, Subaru would make sure that it ends.

In a world in which everyone he wished to be with, to live with, and to save, was gone―― at least, at the very end, he wanted to be at the side of the girl he loved.

[Subaru: Use your lives… to protect me. ――Once I reach the Tomb… you’re free to do whatever you want]

Subaru emotionlessly relayed to the six remaining clones. He took one step, and then another, away from the horde of rabbits, until he was running.
Sensing their prey’s intention to escape, the rabbits raised an inaudible cry as they hounded Subaru’s trail, drooling from their mouths.

Two Lewes clones dived into the Great Rabbit’s mass just as it was poised to leap.
It was followed by the sound of death and crushing flesh, until the two of them were surrounded by the ever-swelling swarm.
In an instant, the two were completely coated in white fur and fell to their sides――fatally wounded, their small bodies transformed into streams of pale-blue light.

And, with their final attack, they caught the feeding rabbits in an explosion of mana, lighting up the Sanctuary’s night sky with its dancing radiance.
Sensing the clones’ final burst of brilliance on the skin of his back, Subaru shook his head to cast off the ones he had deserted, gritted his teeth, and ran for the Tomb.
――And just went on running.

Mobile data can get very unstable so I might go missing for a couple of days. I’ll work offline and release when I can get a good connection.

I’ll get started on Part 2 tomorrow!