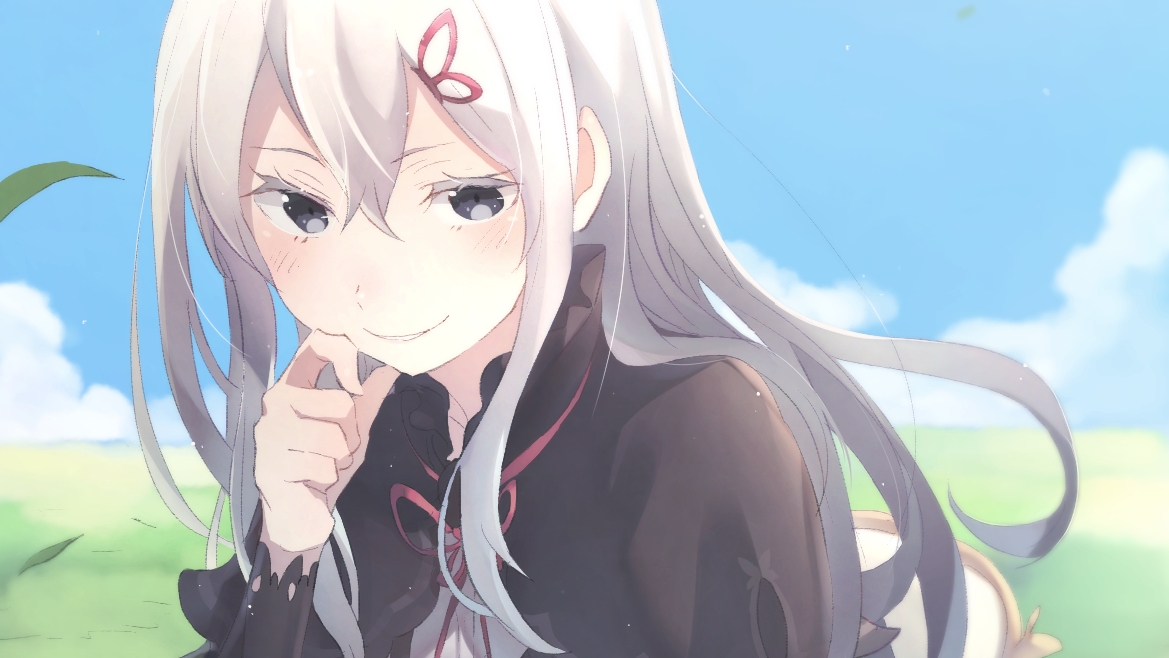 (Thank you Roanz, Jason, Axl, Jean, Soriosh, Dor, Aaron, for helping me with proofreading on the Live Draft! <3)

A refreshing wind reminiscent of summer blew across the small hill of lush, green grass.

The cool breeze caressed Subaru’s bangs, swaying the tall, green grass behind him, then, passing the hill and through the plains, it made its way towards the distant blue sky where white clouds were dancing.
Lightly touching his fingertips to his bangs that were being tickled by the invisible wind, Subaru squinted his eyes at the dazzling sunlight before slowly lowering his gaze to look directly in front of him.

Without knowing how or when, he found himself seated in a swaying armchair. And across a small white table, sitting with her legs crossed in the same type of chair, with an impression of pure white hair and pure white skin that was only overturned by her funerary dress, was a girl―― or not, for that might not have been the appropriate word.

[Subaru: After all, it’s a Witch-sama who’s been idling here for more than four hundred years……]

[Echidona: Well, that’s an awful thing to say to a girl. In my case, I died when I was nineteen, you know. Shouldn’t I look like a pretty young girl who’s quite a perfect match for you?]

[Subaru: That “Died when I was nineteen” part was pretty heavy-sobering… Also, please don’t use that kind of weird statement to try to get close to me. A perfect match for me… that’s gonna send snot flying out my nose, you know]

[Subaru: Not at all. I’m just telling you not to say stuff that’ll make your value plummet, you know. I’m quite aware of what a lowlife bottomfeeder-scum I am. Calling yourself a perfect match for me is only gonna drag you down instead of pulling me up. I mean I… haven’t done anything to make me deserve anything like that]

His fists resting on his knees opened and clenched as Subaru spilled these words, looking up to the sky with a bitter expression.
Hearing this, the Witch―― Echidona rested her elbows on the white table and her cheeks in her hands, inspecting Subaru up and down with her gaze.

[Echidona: You sure seem to have a low opinion of yourself]

[Subaru: When you’re surrounded by epic characters all the time, it’s only natural you’d get into the habit of turning up your head every time you talk. Even though I thought I was supposed to have gotten over that inferiority complex already…]

Looking back on everything he had done up to this point, Subaru tightly clenched his fists.
The force of his grip sent his knuckles clicking as he took a single, deep breath,

[Subaru: So…… what made you send me this tea party invite?]

[Echidona: It’s nothing complicated. I am the “Witch of Greed”, the Incarnation of the Thirst for Knowledge. The thirst, and the desiring heart are pleasures to me, and to have something to yearn to know, to moan and sigh asking “Why” is indeed the greatest of all pleasures]

Saying this, Echidona brought her teacup to her lips.
With the sound of its contents passing down her throat, she lightly smiled,

[Echidona: If I must give a reason, I hope you can understand that it is because you yourself expressed the wish to enter my Citadel, in a location closely connected to this place]

[Subaru: Don’t give me that convoluted…… well, anyway, we can leave why you invited me here for now. More importantly, there’s something I want to ask]

[Echidona: Isn’t that something you should know yourself?]

[Subaru: Knowing and comprehending are different things. I can kind of objectively understand the situation I was in, but that understanding doesn’t fit my current situation at all]

[Subaru: My head was going insane, and I was drowning on land in my own foam, but here, I’m presentable and my head is at least functioning well enough to carry on a conversation. So it’s pretty natural that I’d figure you had something to do with this]

Although he was carrying on the exchange somewhat mockingly, Subaru’s mind was in overdrive trying to come to some understanding of his present situation.
At the very least, being invited to this so-called tea party inside Echidona’s dream world had granted his heart a room to breathe.
Having been given the space to calm his thoughts and search his mind, Subaru remembered the dire circumstances his body was facing in the real world before entering this dream. He did feel a certain sense of unease about leaving behind a body that was going through a state of shock to come here with his spirit, but,

[Subaru: Last time I attended your tea party, I woke up in bed with no idea how I got there, so I don’t know how the passage of time works in this place. I mean, in the actual world outside……]

Thinking to this point, it suddenly occurred to him that this was no time to be relaxing and sipping tea.

――Since he was overtaken by convulsions in his state of shock, Subaru still had no idea what point in time he had returned to.

Much less was he able to confirm the location where he lay writhing and foaming at the mouth.
Burning with regret at this late reaction, Subaru stood up, toppling the chair he was sitting in,

[Subaru: Echidona! Let me out of here now!]

[Echidona: I am appalled, to think you’d leave a Witch’s tea party without drinking a single sip of tea. You really should stop to consider just what kind of an existence is sitting before you――]

[Subaru: I don’t have time to chat with you! Let me out now! While we’re dawdling here like this, outside……]

[Echidona: You have already failed before by taking nothing away, do you still wish to go empty-handed? ……Could it be that you actually want to relive that same loss and pain?]

Unable to hold back his anxiety, Subaru raised his voice at Echidona’s unhurried remarks. But, as if plunging that impatience into an icy bath, Echidona asked this in a voice that froze all emotions.

[Echidona: To go on challenging in order to obtain the results is something worthy of my praises. Whether it is the result you most desired, or the one you least desired, I find there is a certain beauty in the process of trial and error on the road to that result. The fact that you continue to challenge without losing heart is most admirable, I feel. However,]

Raising a finger in front of the silenced Subaru, Echidona went on, narrowing her eyes,

[Echidona: If you do not heed the results of your previous attempts, and instead choose to follow the exact same paths to the exact same ends…… your actions are a desecration to the accumulation of knowledge, and for one who would commit such acts, I hold nothing but contempt, and could not wait to be rid of you]

[Echidona: Incidentally, to answer your question…… the current time outside is immediately after you passed the first Trial of the Tomb. Fortunately, the flow of time here is different from the outside world. I am sure you won’t lose too much time just by having a cup of tea with me]

What Subaru wanted to know, along with his every concern, Echidona checked off one by one.
If what she said could be believed, the time outside would be directly after the first Trial―― that is to say, the restart point of Return by Death hadn’t changed.
And, left out of the tea party, his physical body would be in the room inside the Tomb, abandoned at Emilia’s side as she continued to battle her Trial.

Although he couldn’t just swallow everything Echidona said, at least, having this fact confirmed by a third party injected relief into Subaru’s anxious veins.
With the leeway granted by his calming heart, at last, the question arose――

[Subaru: Echidona…… how much do you know?]

[Subaru: Stop joking around, this is important. For instance……yes, you just said this is immediately after the first Trial…]

The first Trial―― that phrase felt so distant now.
After saying farewell to his parents in the dream world, Subaru met Echidona in an empty school. And following a brief exchange of question and answers, Subaru returned to reality.
And after that, on the way up to this temporary calm, too much had happened to be put into mere words――

[Subaru: I mean, aside from that, this reunion would be right after we parted……]

[Echidona: Indeed. Certainly, in objective time, this would be true, and even in uncertain, subjective time, it has not been long since you and I parted. It must have only been a couple of minutes before we saw each other again]

“Just how much are you yearning for me?” Echidona seemed to suggest with her smile. But, seeing the joke wash off of an expressionless Subaru, she gave a disappointed shrug.

[Echidona: It seems you just never give me the reactions I want. Not getting what I expected is both some parts frustrating and some parts delightful, quite a complicated feeling, really]

[Subaru: I’ll be sure to arrange a nice leisurely date with that complicated girl’s heart of yours when I have the time. But for now……]

[Echidona: Oh, I was so eager to celebrate our early reunion that I seem to have let my mouth run. Well, I guess there’s no helping it that I’d feel a little flustered. After all―]

Here, Echidona paused.
In the void created by the catching of a breath, within that moment, her dark, black pupils cast Subaru an alluring glance. What was that glimpse of emotion flashing through her eyes in that instant? Even now, Subaru could not be certain.
Only, as if welcoming Subaru’s confusion, Echidona returned a lovely, enchanting smile,

[Echidona: Unlike me, who parted with you only minutes ago, to you, it must have seemed like hours, or rather days, since we last met―― isn’t that so?] 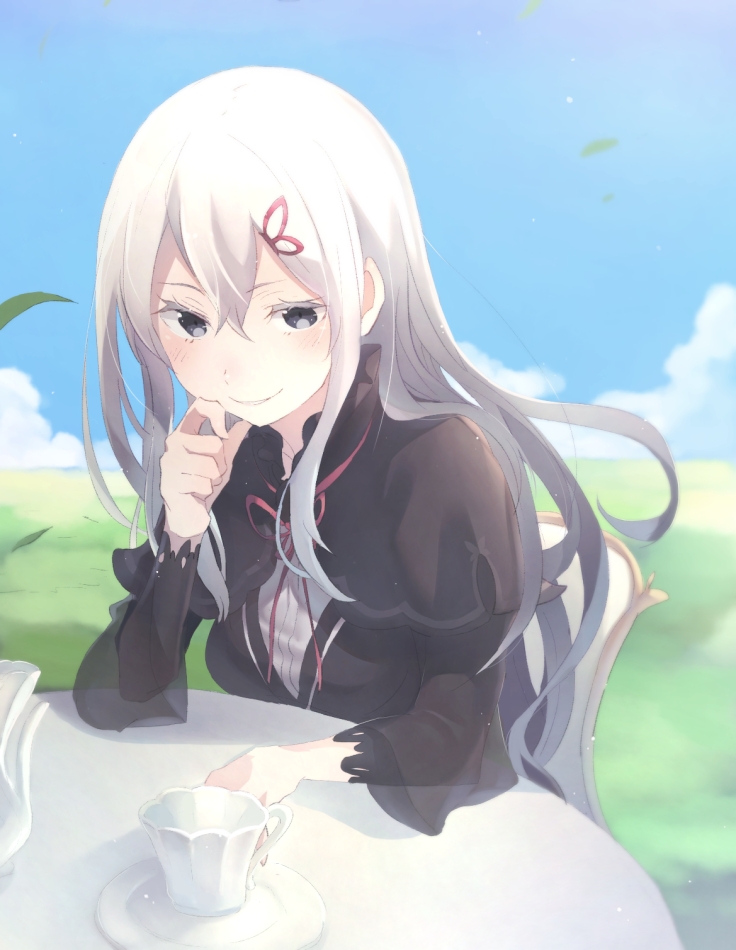 (The incredible fan art is once again by @HaruSabin!)