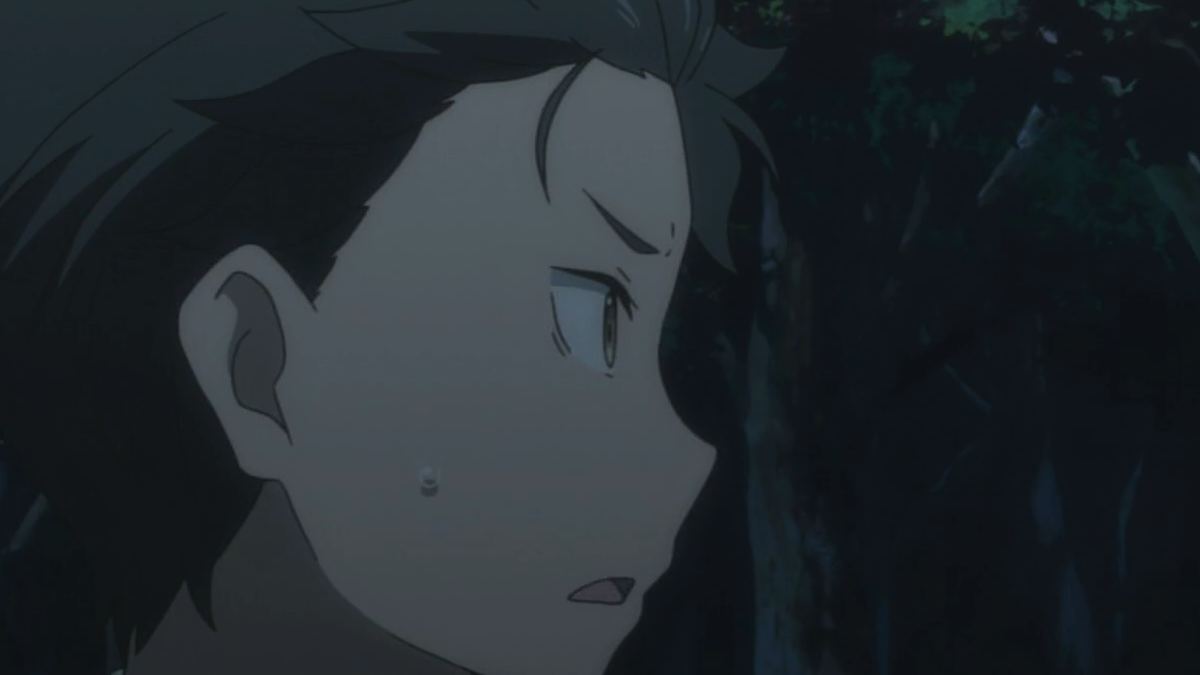 (Thank you Kizarat, Abhahl, Nero, Roanz, Aaron, Rodolfo, Chris, for helping me with proofreading on the Live Draft! <3)

As the fatal question escaped his lips, Subaru realized exactly where he stood.

The words came out, landing safely in Garfiel’s ears―― and the golden-haired youth’s expression changed. Witnessing this, for a moment, Subaru’s thoughts froze still.
It was the same Garfiel who had always kept up his guard around Subaru, sustaining the tough facade with his razor-sharp leer, determined not to show any sign of weakness.
But now, that expression was being twisted into something else.

It was almost like the expression of a child on the verge of tears after his most precious secret had been revealed.

But that fleeting, transient expression only lasted for an instant.
As if eradicating that lapse of weakness, Garfiel squeezed shut his eyes, grit his teeth, and glared back at Subaru like a man possessed.

The silence that permeated the forest and the almost-lonely stillness was abruptly turned, as goosebumps crawled across Subaru’s skin on the receiving end of that stare.
It was his body reacting to the threat of impending danger. An exaggerated reflex to――

[Subaru: You look like you’re going to kill someone]

Touching on “that topic” must have been the last thing Garfiel wanted. His reaction made Subaru quite certain of that.

Without uttering a sound, the coldness of Garfiel’s glare only intensified with Subaru’s mutter.
The fleeting trace of weakness was gone, and, in its place, there was now only dagger-like malice directed at the target of his glare.
Pierced by that gaze, instincts warning of danger pulsed throughout Subaru’s body. But, consciously ignoring this, Subaru kept up his undaunted facade,

[Subaru: Do I have to say it again? I saw some kids who looked exactly like Lewes-san wandering around the Sanctuary. And I’m pretty sure they weren’t Lewes-san]

[Garfiel: ……I don’t know what y’mean. So y’saw Granny takin’ a walk? It’d be another question if she’s strollin’ around in th’middle of th’night, but that ain’t anythin…]

Just as Garfiel tried to rationalize what Subaru described, his desperate excuses shattered as Subaru held up two fingers on his outstretched hand,

[Subaru: I saw two kids looking exactly like Lewes-san walking around at the same time. Maybe one of them was Lewes-san, but then……who would the other one be――]

――The moment he finished his sentence, all sense of up and down blurred into one.

He felt his back slamming into something hard, wrenching all the air out of his lungs.
His spine had crashed into something large and uneven―― the trunk of a tree, and was being pinned there by an enormous force as he dangled sideways, unable to escape.
Suspending Subaru in mid-air with his hand pinning his stomach against the tree, Garfiel stared straight into Subaru’s eyes,

[Subaru: Nowhere too weird…… just… in the forest……]

[Garfiel: No… that ain’t possible. We took too much fuckin’ care t’make sure that wouldn’t happen or it would’ve been found out by y’nosy bastards a long time ago]

Garfiel’s palm pressed harder as he spoke, sending stomach fluids spilling from Subaru’s lips. Regardless of Subaru’s struggling and kicking, the arm wouldn’t budge an inch.
Like an insect pinned up for display. He shuddered at the thought.

[Garfiel: Yer belly’s gonna touch yer back if we keep doin’ this? How ‘bout y’start tellin’ the truth before that happens?]

Twisting his lips into a sadistic grin, Garfiel amped up the pressure against Subaru’s body.
As if Garfiel was proving that he wasn’t joking, Subaru could feel his bones and organs beginning to creak. Gasping, heaving painful breaths,

[Garfiel: Now ain’t that funny. Y’still think y’can negotiate with me on equal footin’? I thought I taught ya t’get rid of those conceited ideas?]

[Subaru: You could just…… finish me off here without getting any answers, but that won’t solve anything]

Uttering those fragmented words, Subaru could sense that Garfiel was listening.

――Subaru had half-expected this furious reaction from Garfiel up to now.

The only time Subaru actually saw the Lewes-clones was during their final showdown with the Witch in the previous loop.
Before that, he had never even imagined their existence, much less spotted any of them in the Sanctuary. But, thinking back on it now, there were actually quite a few peculiarities that hinted at their existence, though there’s no need to get into that here.
Regardless, that was just how well the clones were hidden in the Sanctuary.
It’s hard to imagine Garfiel keeping the existence of more than 20 replicants a secret, so it was probably something known among the residents of the Sanctuary.
If anyone on this side knew about it, it would be Roswaal, and possibly Ram.

Either way, just mentioning it was enough to put Garfiel on edge, that much was the expected half.
As for the unexpected half――

Spitting this out, Garfiel released Subaru’s body.
Without any warning, Subaru dropped to the ground with a surprised [Uwa]. Rolling, tasting grass and soil in his mouth, he spat out the dirt and stood himself up. Then, looking back at Garfiel,

[Subaru: D-don’t just let go all of a sudden, scared me there]

[Garfiel: Shut up, freak. Quit fuckin’ around. Y’fuckin’ testin me?]

[Garfiel: Y’thought I was gonna kill ya when y’said that, didn’t ya]

――The half that Subaru didn’t expect was that Garfiel chose not to immediately kill him.
Even when provoked like this, Garfiel was still giving him a chance to explain himself.
Realizing that Subaru had said those words knowing they might result in his death, Garfiel violently kicked his foot into the ground,

[Subaru: Kinda hurts when you put it like that…… and it’s not like I don’t care or anything]

Subaru smiled weakly at Garfiel and scratched his own head.
While doing so, he noticed that his fingers were actually shaking.

Although Garfiel had stopped inflicting pain on Subaru, his hostility did not seem to diminish in the slightest.
And even now, Subaru’s physical body was screaming with primal terror as though his organs were being wrenched and twisted.

It was only natural, considering the intentionally-provoked Garfiel was standing right in front of him.
That is to say, Subaru more or less understood that he was facing down the same giant golden tiger who rampaged through the forest in the night, slaughtering the villagers.

Just the memory of its ravaging fangs and claws froze his heart with terror.
But still――

[Subaru: If just my life is enough to fix everything, then that’s a pretty fair trade]

If whittling down at Subaru’s heart was the only price to pay, then it’d be quite a bargain.
It’s not every day that you can get a HAPPY END so cheaply.

Even though Subaru’s resolve could break at any moment――the meager foundation supporting it was firm and unbreakable.
Garfiel must have understood this as well. Crunching up his nose into a disgusted grimace,

[Garfiel: I got no good impressions of a bastard with eyes like that. Normally, I’d crush ya on th’spot, but……]

[Subaru: I’d be pretty bummed out if you did that… I’d still prefer if you could magnanimously overlook this. And it really sounds like we’re speaking the same language here……so]

[Subaru: Any chance you feel like answering my question?]

Patting off the dirt on his body, Subaru asked once again.
Garfiel’s face soured at the return of the forcefully interrupted topic, and, turning his eyes away,

[Subaru: Is that right. Oh well, no helping it]

Getting a reply that sounded like something from a stubborn child, Subaru shrugged and casually dropped the topic.
In return, an expression of complete bafflement came onto Garfiel’s face.

[Subaru: But you don’t want to talk, right? And I don’t have the power or the persuasive skills to make you. Well I mean, I could keep bugging you to tell me, but the rewards aren’t really worth the risk, so maybe another time]

[Subaru: Oh don’t make that confounded face, Garfiel. No matter how much you want to keep your secrets hidden, I’ll be sure to expose it. I kind of have to, you know]

Garfiel’s head sprang back up at those words, and Subaru returned his gaze head on.
Their eyes met, but there was no longer the same tension as before. The spirit in Garfiel’s pupils seem to have faded, while Subaru’s steeled their resolve.

[Subaru: Garfiel. I’ll be sure…… to expose all the Sanctuary’s secrets you people are trying to hide. I know I have no other choice, so I’ll absolutely make sure of it]

[Garfiel: ……Shut up. Y’realize if I stuff yer fuckin’ mouth right now there ain’t gonna be no “absolutely” or “sure of” t’speak of, oy]

[Subaru: Sorry, but I’m absolutely sure. As long as I haven’t given up, I know I’ll uncover everything there is to uncover. If there’s anyone to blame for that, blame your own sloppiness]

I have final exams coming in three weeks so I’ll need some time to study next month, but I’ll try my best to get the weekly chapters out without rushing them!

I’ve been running on less sleep recently and I really hope the quality isn’t suffering. I have to thank everyone helping me proofread on the Live Drafts, I really wouldn’t be able tell the weird sentences from the non-weird ones otherwise ❤