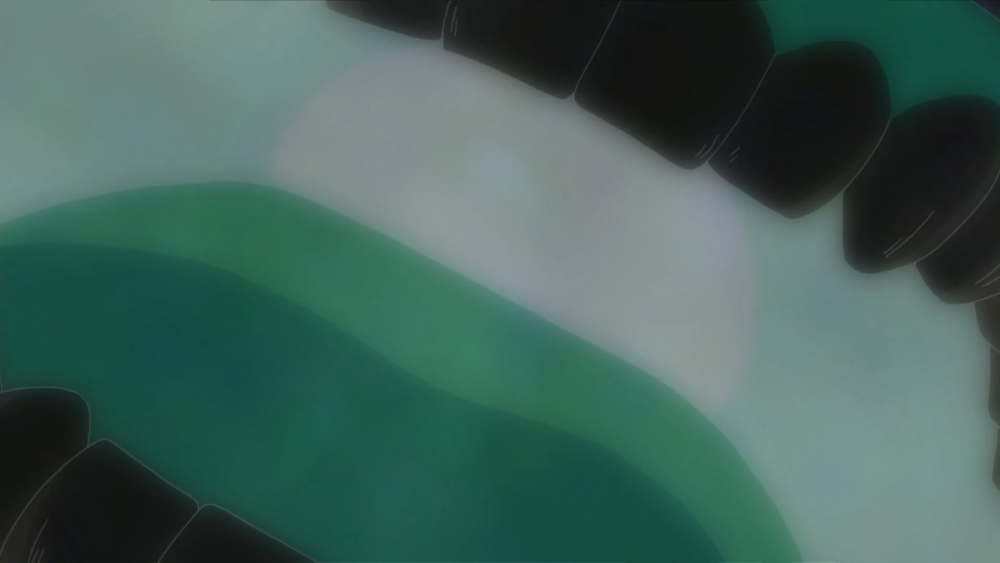 [Ferris: Impossible! His body was definitely dead! The resuscitation failed!]

Wilhelm called to Ferris as if clinging to the last strand of hope, but Ferris cut him off, shouting back his thoughts.
Hearing this, Wilhelm immediately decided on his next action.
That is――

Even the lack of a sword caused no detriment to the Sword Demon’s skill.
Wilhelm crouched down to pick up the jacket that was discarded on the floor, twisting it up along with Subaru’s blood, and used his entire body to lunge it forward like a lance.
Riding on its speed and the added weight of the blood, its tip pierced through the air as a spear of cloth. With what might be called the Cloth-Spear technique, Wilhelm preemptively struck at the rising Subaru.
His aim was true, and the point of his jacket seemed about to pierce straight into Subaru’s face――

――When a cascade of shadows surged up from Subaru’s feet and swallowed the pointed cloth whole, nullifying Wilhelm’s attack.
Sighting the shadow that appeared without warning, Wilhelm instantly drew back his arm―― but could not completely avoid the damage. Three fingers on his right hand were severed at the joints, taken along with the jacket.

Flying backwards, dripping with blood, Wilhelm clicked his tongue as he kept his distance from the now standing Subaru.

[Wilhelm: Felix! Take Emilia-sama away from here, now! I will try to delay it!]

Rolling into a corner of the room, Ferris tossed the dagger at his hips to Wilhelm. Catching it in his left hand, Wilhelm drew it from its sheath with a turn of his wrist and muttered [Feels off with short weapons],

[Wilhelm: Get out of the Mansion, follow Crusch-sama’s instructions――no, that won’t work now. Felix, use your own judgement. Bring the Knights here]

[Wilhelm: It’s something on the level of the White Whale, or even…… what in the world has been living inside Subaru-dono……]

Measuring his opponent’s strength, Wilhelm held his breath as beads of sweat emerged on his skin.
In front of the wary Sword Demon, Subaru’s arms remained dangling at his sides as his gaze swept aimlessly to and fro while his upper body swayed side to side.

It was without rational thought. And perhaps, it wasn’t even conscious.
The question was that despite being in this state, did it have enough awareness to defend itself?

Warily, Wilhelm went on glaring at the transformed Subaru.
Meanwhile, watching all of this, Subaru’s consciousness was caught in a storm of question marks.

The situation had clearly changed from what it was before.
Being forced to witness his sin while his heart was torn and shattered, Subaru was now watching the absurd progression of the world after his death.

What the hell was this supposed to be?
Could it have really happened? If not, then what was it supposed to mean? Why was his consciousness here, now?

He couldn’t understand any of it. None of it made any sense at all, but――

Answering Wilhelm’s urgings for him hurry, Ferris crossed the room and roughly pulled up the fallen Emilia. But a tremor instantly shook Ferris’ expression.

Birthing a white haze, a small figure descended on the center of the room.
With grey fur, and a tail as long as its body, despite being of the size that could fit in one’s hand, the pressure it exerted could easily make one mistake it for some great, ferocious beast.

Making his long-overdue appearance, the tiny Great Spirit floated in the center of the room, gazing down on Subaru. On his expression was unfathomable severity, and his words were rife with contempt.

[Puck: As accomplice to the crimes of that body’s owner, you are deserving of ten thousand deaths―― Witch]

[Puck: Lia is unconscious right now. In accordance with the contract, I will act on my own judgment. The Witch shall not be forgiven. I shall protect Lia. ――As for the one who made Lia cry, I shall not forgive this man]

Ignoring Wilhelm’s protests, Puck’s cold intent was steadily rising.
White mist filled the room, all was starting to freeze, marking the beginning of the deaths of all things. In a world where even breaths would be frozen, Puck’s hostility was directed at Subaru alone.

That Subaru’s head tilted upwards, looking at Puck for the first time.
Its void, blank eyes gazed at the floating Puck, when suddenly, its eyelids twitched.
Then,

Subaru’s corpse twisted its face, and snickered at the sight of Puck.
Full of malice, contorted beyond recognition, a mocking grin.

Watching this unfold, Subaru’s consciousness called for it stop before the destined catastrophe.
But his call reached nothing.

Puck raised his little paw, and when he brought it down, it birthed a small glacier inside the room, its absolute zero threatening to consume Subaru’s corpse. Shadows surged up from below to beat back the attack, as a maelstrom of mana ravaged the narrow room, sweeping Wilhelm and Ferris into its nexus before exploding―― to screams and wails from frozen, tearing voices, as the world-ending white and blackness of despair intermingled before Subaru’s eyes, burying everything.

Abruptly, like the power had been cut, the world lost all color.

The pain of his face smashing into the ground prompted Subaru’s consciousness to wake.

His jaw crashing against the damp floor, Subaru’s eyes teared up at the stinging pain as he shook his head.
And, immediately lifting his face, he quickly scanned over his surroundings. ――Nothing was off.

Cold air and dark space, the dampness of the floor and the scent of mold and decay―― he was definitely inside the Tomb.
Having confirmed this, Subaru opened and closed his hands to check that there was nothing wrong with his limbs. His ragged breathing began to settle, as he exhaled a deep breath from his lungs to force himself to calm.
But the tremors of his very organs refused to be chased away.

[Subaru: A daydream…… that’d be too much of a coincidence. But, otherwise……]

What the hell was that?
After being forced to witness that spectacle, Subaru began to assess the situation he had been placed in.
First of all, without a doubt, that was “A Scene After Subaru’s Death”.

Emilia’s shrieks at the sight of Subaru’s corpse, Wilhelm and Ferris’ desperate attempts to save him―― and the final, nightmarish clash at the end.
The first part carved scarring gashes into his heart, while the second part plunged his soul into incomprehensible, uncontrollable bewilderment.

The moment he remembered it, Subaru bent over, holding the wrenching pain in his waist while the expelled-contents of his stomach splashed onto the floor.
It would be called vomit, but he hadn’t really eaten dinner. All that came out was yellow bile and some tea he had drunk an hour earlier.
He could only repeat this vomiting motion to constrict his stomach in answer to his body’s demands.

It was while repeating this, over and over, that Subaru began to realize the circumstances of his situation.

Inside the Tomb, if he was not summoned to Echidona’s Dream Citadel, then there was only one other place his detached consciousness could have been taken.

No longer the first Trial, where he had to face his past, the second Trial had begun.
Noticing this possibility, Subaru stood there, stupefied.

Indeed, to Subaru, it had been several days since he passed the first Trial. But that only applied to his soul, while for this body and for this world, it had only been several hours. In other words, he shouldn’t have met the requirements for the next stage of the Trials.

If the Trial had started regardless, then it could only be an irregularity. And more importantly, according to Echidona,

[Subaru: She said it wouldn’t be as painful as the Trial to face my past……]

――If what Subaru saw really was a part of the Trial, then even in scratching the surface, he already felt like he was facing the worst possible continuation.

That scene, to Subaru, went even further than Hell.
Subaru had seen Hell many times before. He was aware of that.
If it meant reaching for the best possible future, then he was prepared to witness as many Hells as necessary.

――But, to go deeper than Hell, to know of a world even worse than Hell, was…

{Witness, a present that was not to be}

In the face of that terrifying experience, at a loss as to stay or to retreat, Subaru heard a whisper scraping across his ear.
Just as his body tensed from the shock―― the sensation of his consciousness slipping once again came visiting.

Bracing the fall with his arms, but unable to support himself, he collapsed shoulder-first onto the floor.
He tried lifting his face in an effort to stay conscious, but neither his eyelids nor his neck could resist that invisible force as he was instantly dragged into the depths of the abyss.

――The Trial, the deepest pit of Hell, once again welcomed Subaru.

When he opened his eyes, Subaru found himself on a field of grass, at the scene where Julius’ sword had cut open his throat―― as he was forced to bear witness to his sins once more.

In case you missed it, the Google Doc update last month removed the anonymous chat feature so I’ll have to manually add everyone who wants to chat into the permissions list (email me your gmail address or request permissions from the doc).

I haven’t had a chance to add the latest ones, but I’ll try to do it for the next Live Draft!