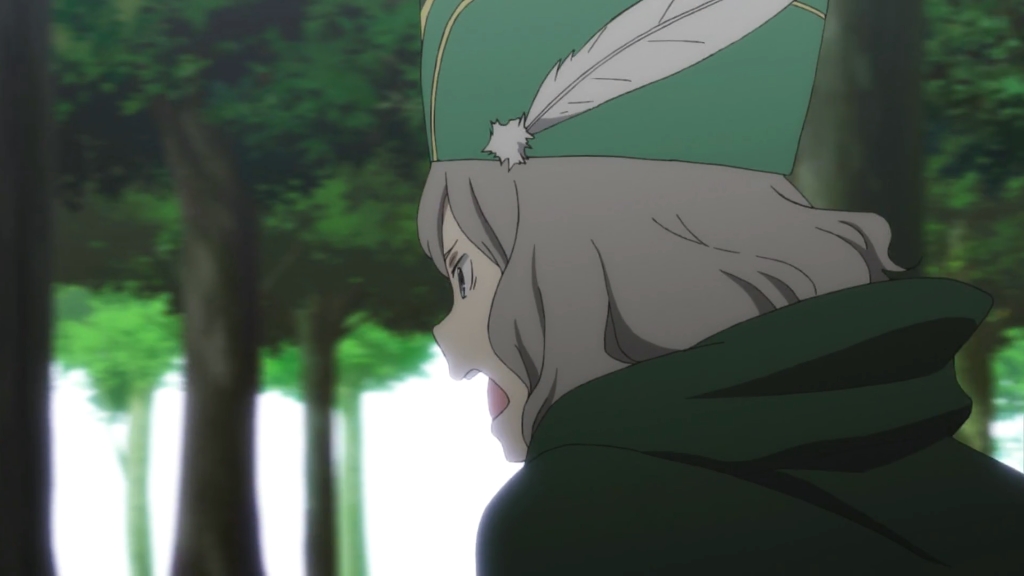 [Otto: I told the other carriages to wait a bit before setting out, and they should all be leaving the Sanctuary by different routes right about now. Not even your legs will be able to catch them in time]

[Garfiel: Different routes? Th’fuck you talkin’ about. There ain’t another easy way outta here except this fuckin’ path! They’ll get lost on the way like sittin’ ducks waitin’ for me t’fetch’em. And I can cross through th’Barrier, if y’didn’t know]

Jumping off the carriage and landing directly in front of Otto, Garfiel lunged a step forward upon hearing Otto’s reply as agitation surged in his chest ,

[Otto: ……I doubt you know much about me, either]

[Otto: You’re the kind of guy who doesn’t give a damn about someone like me. And you have nothing but contempt for people like Natsuki-san and myself who don’t do anything but talk. And so, you paid no attention to what I was doing, or even what I’m doing right now]

[Otto: What I’m trying to say is that I wasn’t just wandering around the forest over the past few days and spending my nights in the stables with the ground dragons for no reason at all. I was uncovering escape routes that don’t rely on this road and teaching it to them!]

Otto flung up both his arms and announced this with a triumphant expression.
Hearing this, Garfiel’s jaw dropped as his sharp eyes widened.

Teaching? Teaching it to who? The carriage drivers? That doesn’t connect with what he was saying just now. Unless, did he mean he was in the stables talking to the ground dragons?
If that was the case, then,

[Otto: Wha!? I’m having a bit of trouble accepting that interpretation just now!]

Seeing Garfiel direct him a sympathetic gaze, Otto blurted back in protest. It seemed every time Garfiel saw him in the Sanctuary, Otto was acting like this, so it was pretty normal at this point.
But, seeing normal behaviour in this context was, indeed, abnormal.

[Otto: They would’ve dispersed in different directions by now, so you won’t catch them. But if you still want to go after them, I was told to tell you this: ――The refugees know nothing about the truth regarding the Sanctuary and Lewes-san. You lose nothing by letting them go. ……So, what do you say?]

[Garfiel: He’s planned this from th’start……?]

The message almost certainly came from Subaru.
He had perfectly grasped the reason why Garfiel didn’t want anyone to leave. Though it wracked Garfiel with irritation to be getting tangled deeper and deeper into someone else’s plot, if what Otto said was true, then he no longer had any reason to chase after the refugees.

[Otto: Suspicious one, aren’t you? But I’ll just say this: none of us, Natsuki-san included, wants to worsen our relations with the people of the Sanctuary. In fact, we’d like to see the Sanctuary liberated under the most amicable conditions…… and right now, it looks like you’re the one getting in the way of that]

[Garfiel: ……I’ve no interest in makin’ friends or gettin’ in th’way of it. ‘Long as y’stay inside]

[Otto: Why get so caught up on the details?]

Otto showed an expression of astonishment while Garfiel exhaled a heavy sigh.
Although he voiced his suspicions, Garfiel judged that it was probably the truth. The fact that Subaru left this message meant that he knew Garfiel’s reasons for wanting to keep everyone inside―― and so, naturally, it would’ve made sense for Subaru to keep whatever secrets he’d uncovered hidden from the refugees.

[Garfiel: But just…… why go t’the effort of pulling all these stunts to get ‘em out of th’Sanctuary? What makes him think they’re gonna get hurt if they stay here? What happened t’trustin’ the people y’wanna be friends with?]

[Otto: In that case, I can think of a name that’d be pretty high on the list. But I asked him as well, and Natsuki-san said it’s for insurance. And also for buying time]

The moment Garfiel heard the words “buying time”, his expression stiffened.
Why on earth would they need to be “buying time”? Garfiel wet his lips with his tongue, and,

[Otto: Just making sure that a boy and girl can have some private time together without getting bothered by nosy peepers, you know]

With an exhausted yet accomplished expression, Otto slowly shook his head.
Garfiel was just about to object to this frivolous reply when he saw Otto’s expression and stopped. Because it was not the face of someone telling a lie.
That means he was speaking the truth. And the boy and the girl must be Subaru and Emilia.

A gut feeling immediately told him that those two must not be allowed to meet.
The bestial blood coursing through his veins instinctively knew this.

Garfiel’s face sprang up as he turned to the direction of the village.
If he allows Subaru and Emilia to meet, something unthinkable is going to happen. The Sanctuary will be liberated, and――

There’s no way they can do it, Garfiel’s rationality told him.
He himself had seen how Emilia was broken by the merciless Trials. And it was only yesterday when she’d lost the primary support of her heart.
How could that girl, crushed and beaten by her own nightmare, recover in the span of a day?

But Garfiel’s instinct screamed for him to rush over there and stop them.
In the Trial of the Past―― even if it was a different past, all challengers are presented with their most forbidden memories.
Garfiel was shown his when he foolishly stepped into the Tomb.

Just thinking back on it made all the blood drain from his body while an unbearable hollowness breached into his heart.
From that point onwards, he had always told himself to be strong, so strong that he would never have to betray his decision. That was how deep the Trial had cut into his heart.

[Garfiel: Th’situation’s changed. I’m goin’ back to th’Sanctuary. I gotta find ’em and change their minds before they……]

[Otto: And you think I’m just going to let you go?]

Just as Garfiel turned to head towards the village, Otto called out to stop him.
But Garfiel’s response was fierce.

Closing the distance with a single step, Garfiel drove his fist into Otto’s stomach.
Avoiding the ribs, Garfiel aimed straight for Otto’s gut, sending him flying backwards, foaming at the mouth as he crashed to the ground.

Garfiel had gone easy on him. He had put in more than enough force to knock Otto unconscious, but in terms of payback for the trick he’d played on him, Garfiel was being more than merciful.
Clicking his tongue at the fallen Otto, Garfiel lightly dug his heels into the earth, and――

――Just when he was about to launch into his sprint, Garfiel stopped.
Dumbstruck, he glanced back and saw that Otto was standing.
He was holding his stomach, coughing and drooling, but conscious nonetheless.

[Garfiel: Th’fuck? I wasn’t tryin’ t’kill ya, but that punch should’a knocked y’clean out, oy!]

[Otto: Is that right…..? Then… I guess I’m… tougher than you thought. Yeah…… looks like the daily workouts were worth it after all. ……A travelling merchant’s body is their greatest capital, they say… so it pays to stay healthy……]

Otto gave a painful chuckle while an ominous feeling compelled Garfiel to properly turn around.
One more blow and he’ll definitely go down.

No more going easy this time. He’ll aim for the head instead. It’ll probably leave a scar, but it’ll knock him out for sure.

[Otto: You’re still… going easy on me……? You know… that half-assed attitude is exactly why you’re gonna lose!]

As Garfiel leaned forward preparing his next strike, Otto screamed back.
Glaring at Garfiel with bloodshot eyes, Otto swung his arm with all the strength he could muster.

The next instant, a screen of flung-up leaves covered Garfiel’s vision, creating a momentary opening.

Startled by the sudden reversal, Garfiel’s body froze still.
And――

Alongside Otto’s throat-tearing shriek, a burst of light pierced through the screen of dancing leaves――

――Swallowing Garfiel’s body into a radiance of blinding red.

I said this before, but reading you guys’ comments cheer me up more than you can imagine… and I promise I won’t stop until the end ❤

Let me know if you see any typos!