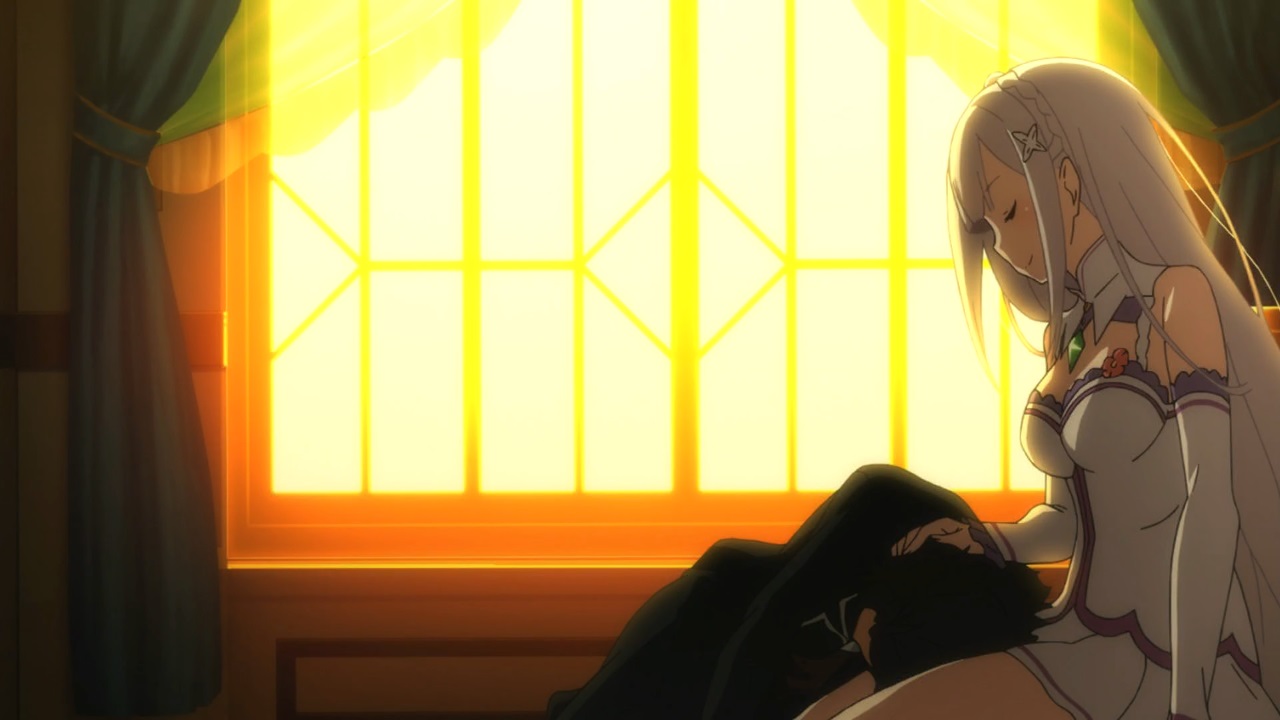 On the road home, a strange, stifling gloom descended on the dragon carriage.

The carriage itself, Crusch had gifted to Subaru along with Patrasche, as another sign of gratitude. Even without the ornamentation, it was clear that it was an expensive piece of craftsmanship. But from the softness of the seats to the glamour of the interior, everything felt a bit excessive.

The spacious interior could fit ten people and still have room left over, so it’s no wonder they didn’t know what to do with themselves, with only three passengers riding inside.

In the carriage, Emilia, Subaru and Rem kept the silence. Rem was, of course, sleeping. Sitting next to her, Subaru was waiting, without even the thought of moving from his place. Perhaps out of consideration for the unconscious Rem, Emilia held back her words.

This is bad, Subaru thought, crossing his arms. Though it’d be outrageous to have a lighthearted conversation under these circumstances, there is so much they need to talk about. They have to decide on their stance regarding the Royal Selection, they need to get up to date on the Alliance with Crusch’s faction, and they still haven’t even talked about what happened over the past few days.

Then there was Rem. How would she be taken care of at the mansion if no one but Subaru remembers her? Even though it’s inevitable, just the thought of what Ram might say, when she sees the unconscious Rem, sends shivers down his spine.

[Emilia: I know you’re worried, but right now I feel the atmosphere might have been better if the kids were riding with us…]

Of course, the children were also in the entourage heading back to Roswaal’s domain. But they are riding with their parents right now. If they asked about Rem, it would be difficult to explain, and what if the villagers think it’s a disease… Unfortunately, the result is the current silence.

What to do now. — It is unusual for Subaru to feel so restrained, he looked up at the ceiling thinking.

[I don’t know what, but can’t you two think of something to talk about!? Aaaah, I can’t take this awkward silence anymore!!]

[Subaru: What are you saying!? Sneaking in out of the blue!? Wait, were you there all along?]

[Otto: That’s rude! Of course I was here! Do you even remember the conditions under which I agreed to help you out!?]

Otto said in an over-exaggerated way, sticking his head into the carriage from the opening in front, sending a bit of spittle flying along with his voice. Otto was the one driving the carriage, sitting outside in the driver’s seat. He stuck his head through the hole connecting to the carriage’s interior just to comment on the quietness inside the carriage.

At Otto’s objections, Subaru tilted his head and nodded while muttering [Ah, ah]

[Subaru: I remember, I remember. Right, I remember you asked me to help you meet Roswaal, right? … Ah, but, what can I say…]

[Subaru: Well if you’re just chasing after guys it’s one thing, but when the guy is Roswaal… I’m straight by the way, and I already have Emilia, so please don’t come after me]

[Subaru: A trader looking for some excitement?]

[Otto: Why do you treat me like a pervert!?]

Looking at Otto as if pitying him from the bottom of his heart, Subaru shook his head sadly from side to side. Emilia, who had been quietly observing their conversation, suddenly opened her eyes wide and said with a surprised expression

[Subaru: Oy, oy Emilia-tan. Please stop it with the jokes. Putting me in the same basket as this money-grubbing merchant… The only thing I’m greedy for is your love!]

Sighing at the travelling merchant, Subaru got up and took hold of the flap to close the window to the driver’s seat.

[Subaru: Ok, shutting you out!]

Pulling the flap shut with a clap, the face of the man who had been trying until the very end to say something finally disappeared. Joining his fingers and stretching his arms like someone who had just completed a rough task, Subaru turned around to see Emilia blankly looking up at him.

Looking at each others faces, they suddenly burst out laughing.

For a while they let themselves be taken along by their laughter, but after a little while, their laughter started to wane, until silence once again descended upon the carriage.

[Subaru: Letting this heavy atmosphere be, really isn’t like me, is it?]

[Emilia: You’re right, it’s not like you at all. The Subaru I know is a much more spirited, unreasonable, lively person. So much so that no matter what I’m feeling at the moment, he completely blows all my bad feelings away]

[Subaru: I feel like that could also be translated into an airhead who can’t read the mood…]

In any case, Otto being there had actually cleared up the mood tremendously. Thanking Otto for this would probably make him angry, but nevertheless, Subaru thanked him in his mind while getting up and sitting down next to Emilia as if it were the most natural thing in the world. Seeing this put a wry smile on Emilia’s face.

[Emilia: You always just naturally sit next to me huh, Subaru?]

[Subaru: Well, it’s natural for someone to want to sit next to the girl they like, so I want to sit as close as I can, and breathe the same air as you]

Being hit straight with an earnest confession of love made Emilia’s face turn red, but the pervertedness of the second half made her scowl. Leaning his head toward her at her reaction, Subaru said

[Subaru: Hmm, I was just trying to act like I always do, you know]

[Emilia: Come to think of it, I guess you’ve always been like this. It’s because you’re like this, that I’m never able to just take in what you’re saying…]

As Emilia looked at him, her voice turned into a quiet mumble, then faded completely. Subaru scratched his head, considering whether or not he should pick up the conversation…

[Subaru: Guys just can’t mentally handle being straightforward, and not pretending to be kidding around when it comes to this sort of thing. Me loving Emilia-tan, me looking at Emilia-tan in a perverted way, and me wanting to help Emilia-tan are all my true, honest feelings. You can believe that you know?]

[Emilia: I believe it, but believing and accepting are two different things…]

[Subaru: That’s fine with me, believe me, and I’ll work hard until you accept my feelings]

Thinking about it again, that was a pretty aggressive proclamation. In fact, hearing that from Subaru, Emilia’s face was blushing.

Fighting hard to remain unflustered, her cheeks and ears already turned so red that her expression couldn’t keep up. She must never have had anyone confess their unconditional fondness for her before. Of course Subaru, the one trying to hit on her, didn’t have any experience either, so his face was also completely red.

[Subaru: Rather than walking on with a downcast expression, this is more like me. Right, Rem?]

[Emilia: …just now, did you say something?]

[Subaru: I was just thinking how nice it would be to lift up your hair so I could stare at your neck pervertedly]

[Emilia: Right there, you are trying to distract me again… You care a lot about Rem-san, don’t you?]

[Subaru: I do, yes. Immensely… I care about her. I’m always thinking I must do something, and I think, and I want to keep on thinking. Even though I wanted Emilia-tan to be the first in my thoughts, this can’t be ranked… I’m sorry]

[Emilia: I’m not a bad child that will get angry and throw a tantrum. I won’t get angry about something so important… I can tell just by looking, she is very important to Subaru]

Like Subaru, Emilia turned her narrowed gaze to Rem in her sleep. Her lips trembled. Then after a short moment of hesitation, she asked

[Emilia: I don’t know how I feel about this, but… Subaru, are you the kind of guy that flirts around?]

[Subaru: I thought I was supposed to be a pretty faithful guy, but having someone be so devoted to you is… a  guy whose heart isn’t moved by that, I don’t think he could have a drop of blood or tear in him]

Thinking back to the loops over the past few days, he remembered, how many times he had received Rem’s unconditional love. Receiving it all, how could his heart not move? By the time he noticed, her existence inside his heart had already grown far too large to ignore.

[Emilia: Even though you told me that you love me]

[Subaru: Just to make it clear, I love Rem a lot, but Rem still loves me WAY more, you know? She’s completely fallen head over heels for me, and I seriously can’t understand why]

Hugging his shoulders, he wondered how she could love him so selflessly. To be loved this much by a girl like Rem, was he really worth it?

He still couldn’t help but wonder why. But even so… as the man she fell for, the very least he could do, is to try to live up to what she sees in him.

[Emilia: I think I understand her]

[Emilia: The reason Rem-san came to reeally love you. I’m sure it’s because she got to see Subaru’s good side up close, a lot. You’re kind of like a disease that sometimes becomes really incredible, and does some reeally incredible things]

[Subaru: A disease? I… can’t actually deny that]

Subaru scratched his cheek and pouted, showing his dissatisfaction. Emilia, unaffected, held her stern expression as if to say “it’s true you know”, then, closing her eyes

[Emilia: I won’t fall for you that easily you know]

[Subaru: That makes the effort all the more worth it! One day, I will make Emilia-tan go all gooey and fall for me, wake Rem from her sleep, and settle this in a nice way. Aaaah, I’m smiling just thinking about it!]

To have Emilia and Rem each pull on one of his hands, fighting over his one and only body. That would be a such a blissful, incredible sight.

[Subaru: I’ll have you two pull me until I split into a thousand pieces!]

[Emilia: I have no idea what you’re thinking, but I feel like I have to say this: I’m not going to do anything like that!]

Thanks to Nicholas for translating the draft for this segment!! Most of your humour actually made it into the final version because they’re just so funny the way you worded it! Really awesome!!

This is the first time I am editing from a rough draft translation, and it’s a lot of fun! Time-wise it took me 5 hours yesterday and 4 hours today to finish editing a 2000 word segment, which is about 30-50% less time than if I translate this from scratch. The important thing is, all that time is spent on editing, which I absolutely love to do! And having more time to do it thoroughly is just wonderful.

Nicholas, Tynkerd(Darren), and Safin will all be working with me starting this weekend! Tynkerd has already finished the draft for Chapter 2, and everyone is working on the drafts for Chapter 3 now(except for me I have to catch up on all the editing still!)

The next and final part of Chapter 1 is translated by Safin! I’ll try to finish editing it tonight!

And all the anonymous guys thank you!

Thank you everyone coming back to read and for all your support! Thank you!