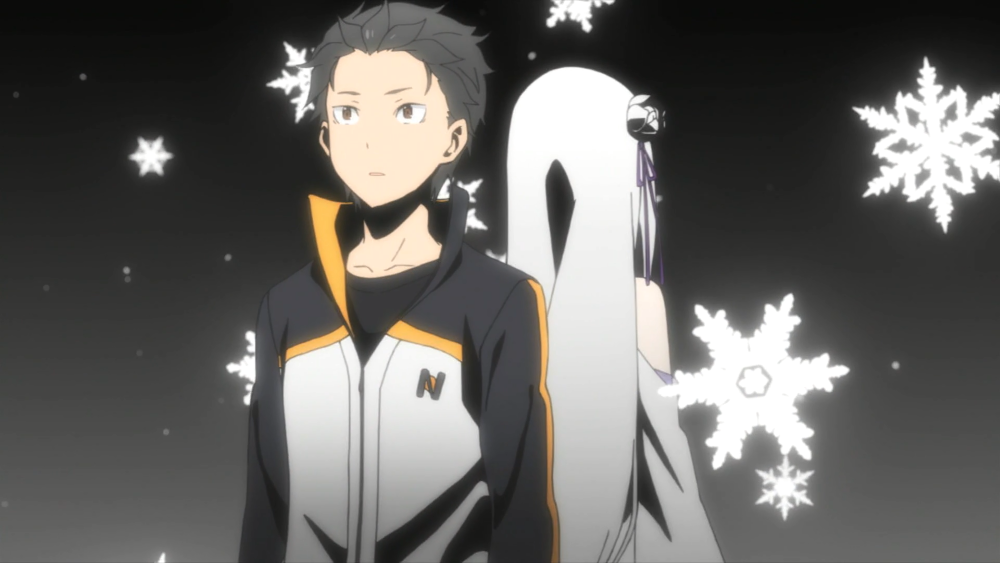 ――He felt his head clearing up.

The chorus of agony up to now that had been ripping him apart subsided, and now, there was only one thing on Subaru’s mind――the resolve to face his father in front of him.

Once more, he repeated his answer to that question.
Putting it to his lips again, Subaru felt his heart beginning to walk forward.
In front of his eyes, hearing that confession, Kenichi blinked several times before noticing how abrupt that statement sounded,

Speaking in a quiet voice, he listened to Subaru’s words.
That attitude was like a salvation. There were people who were willing to listen, Subaru must have already known this, yet he had only ever kept it to himself.
Now, he intended to bring an end to it.

――Because there is someone behind me, pushing me on.

[Subaru: That’s right. I am not the child who only curls up in a room anymore]

He didn’t know exactly how much he had changed.
The no longer a child part might be stretching it a bit, for he was still aware of how childish he was.
The courage to hold his head high, the resolve to face his weakness, the determination to no longer run from unpleasant situations, it seemed he hadn’t acquired any of it, after all.
He was simply someone worse than a child, finally admitting that he was a child.
And even that, he couldn’t have realized by himself.

The silver visage that appeared within his mind, sent a sweetness into Subaru’s heart.
It was a radiance that brought warmth to the stagnating Subaru, who had long been frozen in place.

Silver――was supposed to be a color of coldness, but to Subaru now, it was a source of endless warmth and the strength to march forward. As though mesmerized by this heat,

Who nothing could have gotten past. He knew who they were.

[Subaru: Mom, and dad, I wished you would’ve beaten me]

[Subaru: I was such a hopeless, little, useless idiot, self-conceited piece of trash, I wished you two would just beat me……and give up on me]

Silently staring at Subaru, Kenichi’s eyes did not move.
Subaru saw his own reflection inside those pupils that were the same color as his own. The sharp corners of his own eyes that were often mistaken for a sign of displeasure, for some reason, were now feeble, and drooping.

――How pathetic, he thought.

[Subaru: When I was little I was clever, and I could find a perfect solution to anything. Running too, and same with studying……the things my friends around me couldn’t do, I could figure out almost immediately, and I was even mystified by why everyone else had so much trouble]

Perhaps it was childish conceit, or one could call it an adorable sense of omnipotence.
When Subaru was little, his athletics and learning were all ahead of other children his age. He could run faster than those around him, he was smarter than those the same age as him, and as if it were only natural, he was at the center of everything――

{He’s that guy’s child, after all}

Everyone gave Subaru this appraisal, adults and neighbors alike often kept it on their tongues.
He knew, by “that guy”, they meant his father, and the fact that he was his father’s son was recognized by people all around. ――And the young Subaru took pride in those words.

Dad――Subaru’s father, Natsuki Kenichi, in his son’s eyes he was a person full of charisma and allure.
He laughed well, talked well, cried well, angered well, exercised well, worked well.
His father could announce his love for Subaru and his mother in public without feeling the slightest embarrassment, everywhere his father was surrounded by people who admired him, and he always saw his father standing in the center of a crowd of smiling faces.

To Subaru, such a father was more than anything he could have hoped for, to have such a father who cherished his family, Subaru and his mother, above all the world, instilled him with a sense of superiority to the point of exuberant pride.

[Subaru: When did it start I wonder…… I don’t remember, but one day I lost a race, I think. Soon, I was no longer the first at everything. There were now guys who could run faster than me, guys who can solve problems faster than I can. Little by little, my first-places grew fewer and fewer, and it felt strange, I thought]

Once it had started it only grew worse, and the shining stars within Subaru’s heart gradually left him.
Even if he stretched out his hand, running here and there under the sky, the stars that once shined all around him were nowhere to be found. There was only the silence of the coming, enshrouding darkness.
And in that elusive, uncertain anxiety,

{He’s that guy’s child, after all}

Those words became Subaru’s salvation, the last hope he could hold onto.
Even if he was not the fastest or the smartest, those words continued holding up the young Subaru’s confidence.

Rather than training to run faster, or devoting all his efforts to his schoolwork, he decided first and foremost to do stupid things.

Sneaking into school at night with his friends, drawing over the white lines all over town, chasing away notoriously dangerous stray dogs from their hangout spots――all so people would not grow tired of him, so he could protect the last of his dwindling stars.

[Subaru: “Studying hard is stupid. Being able to run fast is nothing to be proud of. The things I was doing were making people happy, and that’s far more, far better than what anyone else could do”]

In order to sustain this mistaken Pride, he had no choice but to keep going.
He will take the lead to do what others are afraid to do, challenge what others loathe to challenge, this way, he would make sure he did not lose his carefully protected place in the world.

[Subaru: But, if I were to protect myself this way, the next time I’d have no choice but to do something even bigger. It can’t be less than what I had done before. They’d think I was someone small if I did, and I couldn’t let that happen]

So Subaru’s actions could only become more and more extreme.
If anyone asked why he would do such things, “he’s Natsuki Subaru” would be the answer.

Straining himself, stretching himself thin, he tried to hide his nervousness, so that not even he himself would have noticed it, he continued fooling himself and those around him that he could do much, much more.
Because he was Natsuki Kenichi’s son, Natsuki Subaru.

[Subaru: I thought I could do anything. I made myself believe that I would do anything. And without ever bothering to think beforehand, everything I did, and every consequence of what I did became a stupid mess……]

Like a moth circling toward a flame, he singlemindedly pursued the heat without even noticing if he had caught fire.
If he really was a moth, becoming enchanted by a flame would have been the end of him.
But Subaru was not a moth, nor were the friends who surrounded him. They were only human, even more so than Subaru.

――It appeared nothing in particular had set it off.

Attracted by the mischief Subaru proclaimed, similarly scary-faced kids came gathering around him.
And like teeth breaking off of a comb, the number of companions around him began to drop.

[Subaru: A bunch of idiots, I thought. You won’t find this kind of fun anywhere except sticking by my side. Those guys will regret it, but they’re free to waste their boring time elsewhere. My sights are on something higher]

If he continued searching like this for the whereabouts of those stars, at least he won’t lose sight of the star above his head.
Of the sea of stars that once should have painted all the sky, now, only one lone, sparkling star remained to Subaru, and so he walked on and on without letting it out of his sight――until suddenly, when he turned his eyes from the star-lit sky back to the ground,

[Subaru: There was already no one else around me]

Of course this happened.
Without minding his surroundings, continually chasing after stars that no one else could see.
His companions, who at first found it amusing, seeing the ever escalating wildness with no landing point in sight, could no longer follow him.
Paying no mind to this, only mocking at those who left as idiots, even those who remained grew uneasy and doubtful.

One, and then another, his friends disappeared from his side, until he noticed he was all alone under the starlit sky.
Feeling angry, sulking, wanting to forget, he gazed up at the sky――

[Subaru: Even the radiant star that should have been above me is nowhere to be found anymore]

When he lost sight of the light of that star, deserted by the friends around him, left alone in the dark of night, Subaru finally noticed it.

――I was never anyone special.

God I feel so much like Subaru… when I was little I felt like I was invincible, and everything was possible. And it’s as if all of growing up had been a process of trading that away. As a kid I did all sorts of weird things to try get people’s attention, and everyone in school knew me because of it, but I never made many friends that way, I was just a funny guy who did weird things. It was only in highschool, when a girl who sat in the desk in front of me in social-studies class truly made me her friend. I think I’ll be indebted to her for the rest of my life because of that.

This chapter is quite long with over 7500 words. I think I’ll release it in 4 parts so they’re in smaller more digestible chunks both to read and to work on.

Thank you for all your best wishes! These last few weeks I only had time to translate during the weekend, but thank you everyone, so, so much, for being so patient. Starting next week I’ll see if I could do a more frequent stream of smaller releases again like I used to when I first started.

Safin’s coming back to help out too :3