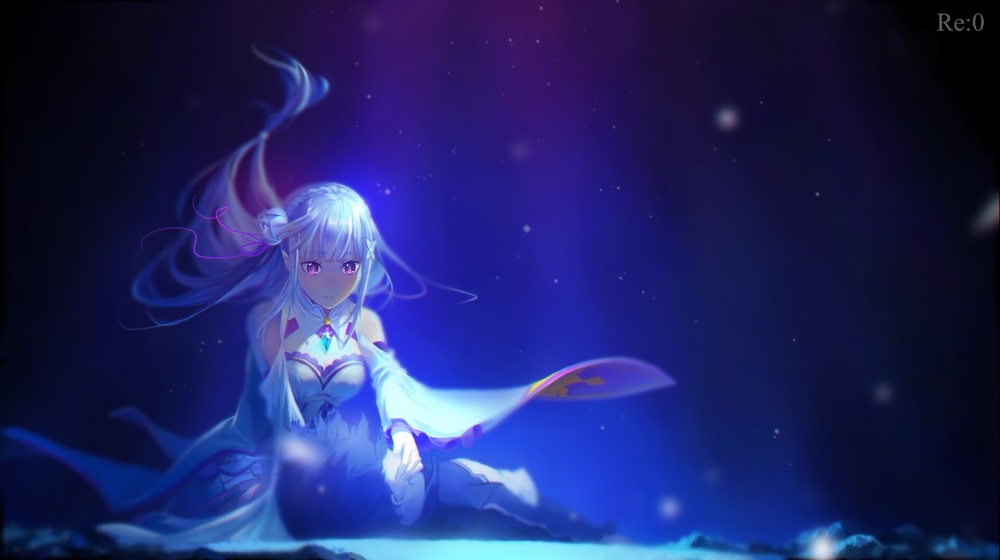 (Thank you Roanz, Aaron, Tamas, Kam, Brototype for helping me with proofreading on the Live Draft!)

By the time Subaru arrived at the Tomb, his body could no longer feel the cold.

The snow had clouded his vision, and it felt like his eyelashes were frozen, but, spilling a white breath from his shivering lips, Subaru didn’t seem to care.
The only thing his heavy, leaden thoughts could envision was a single, solitary girl.

With his footsteps echoing upon the stone-tiled corridor, Subaru headed into the depths.
At the Trial room, there would be a girl whom he had put to sleep, waiting for him.

When he reached the open space, a voice like a silver chime called out his name.
Letting his feet be lured in by that voice, he entered the room. And, upon seeing him, the one who called to him raised a voice full of delight.

[Emilia: So it is you, Subaru! Gees, where did you go? I was so worried]

Emilia ran up to him with skipping steps and took him by the hand.
Pouting, she pressed his hand against her chest, transferring over her tender warmth as she looked up,

Emilia giggled at Subaru’s straightforward admission, her cheeks blushing red.
Then, still holding onto Subaru’s hand, she suddenly sat down on the spot. Folding her legs and sitting on her side, she pulled the half-crouching Subaru closer,

[Emilia: Yep. Subaru, you like my lap pillows, don’t you? That’s what you told me. I do remember these things, you know. Here, go~ on]

She gave her lap a pat, smiling as if both proud and embarrassed at the same time. Obediently, Subaru sat down and settled his head on her soft thighs.
The moment his short hair brushed against her skin, Emilia let out an enticing [Mn~], but soon proceeded to stroke his head with practiced form.

[Emilia: How many times is it now, that I’ve given Subaru a lap pillow?]

[Subaru: not sure…… this is the third, I guess… somehow, it’s always when I’m exhausted and broken]

[Emilia: You know, Subaru, it’s fun to fiddle around with your hair and cheeks… Ta~ke that, fiddlefiddle~~]

Pulling on his bangs and poking her finger into his cheeks, Emilia happily played with Subaru’s head.
Knowing that it was an expression of her affection, he didn’t feel the slightest urge to push her fingers away.
In a world that was ending―― for now, he just wanted to drown in Emilia’s love.

――Because he had already lost most of his blood and viscera.

The goriness of Subaru’s current state would make any normal person want to look away.
His back had been scoured by fangs, and one could probably see the bones if he lifted up his clothes. Profuse blood was streaming from his demolished thighs, and on his right hand, which he used to swat away the incoming rabbits, only his thumb remained intact.
Perhaps it was delusional tenacity that led his murky consciousness here. That, along with the freezing cold that had ironically dulled the sensations of his body.

[Emilia: Subaru, did you get a little lighter?]

[Subaru: I’m trying out the blood-loss diet…. it’s…… like dump the ballast, and get lighter and light…er… something… like that……]

[Emilia: I don’t understand what you’re saying, but you did something crazy for someone else again, didn’t you? That’s the kind of person you are, Subaru. I know that, but…… I still get reeaally worried]

[Emilia: The truth is, I only want you to do that… for me. But, I know that’s being selfish, and I wouldn’t want to see Subaru pretend not to care about anyone else because of me. ……Even though that’s me being selfish too… sorry]

Emilia’s rapid-fire words grew distant.
Unlike the frigid cold outside, the Tomb’s interior retained a certain level of warmth. This ironically restored Subaru’s metabolism to its normal levels, and renewed his sedated bloodflow.
Fresh blood dyed the stone slabs red, as even more was coughed out of Subaru’s mouth.
Dots of splattered blood stained onto Emilia’s white cheeks. But――

[Emilia: Say, Subaru, are you listening? There are so, so, sooo many things I want to tell you, and ask you. So, please. Stay with me. Listen to my voice. And let me hear yours, ok?]

Emilia didn’t seem to mind the touch of blood on her cheeks.
Or rather, she never even noticed them. Her amethyst eyes were on Subaru, and were certainly seeing him―― but they simply hadn’t accepted the reality they reflected.

From the moment Subaru set out from the Mansion, he was already littered with the marks of Elsa’s torture. Being dragged to the Tomb by Garfiel must have only worsened his miserable appearance.
But Emilia didn’t make note of Subaru’s wounds, or seemed at all worried.
Even now, with various parts of his body missing, eaten by rabbits, she didn’t react any differently.

He was supposed to warn Emilia of the danger and take her far away from here.
The Great Rabbit had already overrun everything outside the Tomb, and would probably rush inside at any moment. When they do, Emilia wouldn’t stand a chance.
Just like Roswaal, and the villagers who chose to die in the fire, Emilia would not escape a cruel and gruesome death.
But, even knowing this, Subaru didn’t warn her.

Because, within moments of losing his life―― he couldn’t escape his selfish desire to face the end at Emilia’s side.

Roswaal’s words and grisly demise, the regret for Garfiel and Ram’s deaths, the devastation of losing Petra and Frederica, and the sense of powerlessness of his inability to save Rem and Emilia, all struck Subaru to the core.
Pain, or even the terror of death, none of it mattered anymore.

――Right now, all he wanted was to vanish from this world.

Subaru’s haphazard and selfish wish would be fulfilled.
The world was clouding over, while little by little, his consciousness and his soul fell away from this place.

Strength deserted his limbs, and the last of his sensations left his body.
All that remained, all that stayed behind, was Emilia, seemingly unaware of Subaru’s departure.

Emilia didn’t seem to notice it, but only adorably tilted her head at Subaru, who had gone quiet.
Then, she smiled, and brought her face closer――

She took the silent Subaru, and kissed him on the lips.

――His first kiss was of the cold taste of Death.

“Dona Tea” sent me a few pieces of amazing fan art by @SageKavane: 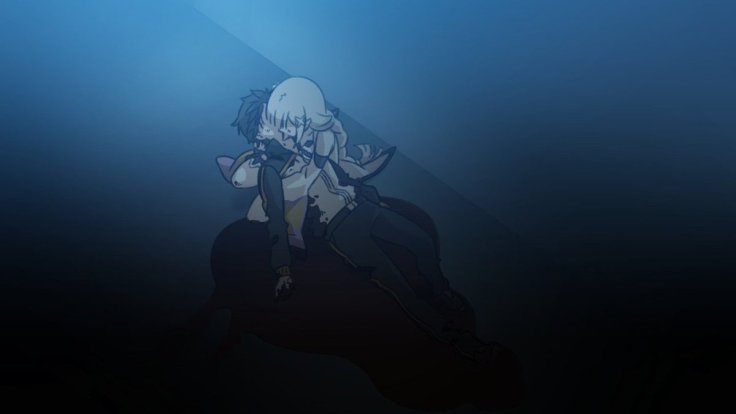